Warning: preg_replace(): The /e modifier is no longer supported, use preg_replace_callback instead in /home/uplsjbpg/POLITICROW.COM/wp-content/plugins/covertsocialbuzz/CSSmin.php on line 324

Warning: preg_replace(): The /e modifier is no longer supported, use preg_replace_callback instead in /home/uplsjbpg/POLITICROW.COM/wp-content/plugins/covertsocialbuzz/CSSmin.php on line 328

Warning: preg_replace(): The /e modifier is no longer supported, use preg_replace_callback instead in /home/uplsjbpg/POLITICROW.COM/wp-content/plugins/covertsocialbuzz/CSSmin.php on line 340 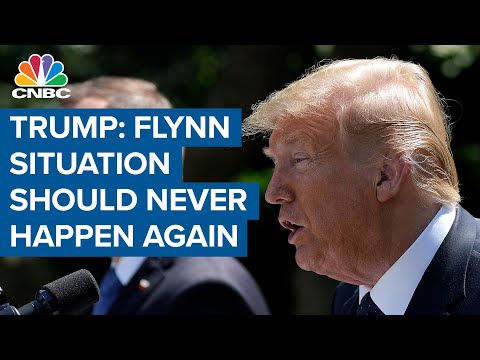 The 2-1 ruling by the panel of appellate judges stressed the power of the Department of Justice, which has sought to drop its prosecution of Flynn, to make criminal charging decisions given its status as part of the executive branch.

The ruling came in response to a request for a so-called writ of mandamus, or judicial directive, from Flynn’s lawyers.

The defense attorneys asked the U.S. Circuit Court of Appeals for the District of Columbia Circuit after the trial judge did not promptly grant the Justice Department’s highly unusual motion to dismiss the case.

Instead, Judge Emmet Sullivan appointed a lawyer, former federal judge John Gleeson, to make arguments to him about why the case should not be tossed out. Sullivan also said he would consider arguments for or against the dismissal request from third parties not connected to the case.

Appeals court Judge Neomi Rao, in the decision for the majority Wednesday, wrote that the case is about whether a trial court judge can prolong a criminal case and appoint a so-called friend of the court such as Gleeson as a legal advisor after prosecutors have “explained why a prosecution is no longer in the public interest.”

“On that, both the Constitution and [prior legal] cases are clear: he may not,” wrote Rao, who was appointed by Trump.

It is not clear whether the ruling will be the last word in the case. A judge on the appeals court could ask for a review by all the court’s judges. Such an review, known as an en banc hearing, is not usually granted in the D.C. circuit unless a case “involves a question of exceptional importance,” or is needed to “maintain uniformity of the court’s decisions,”

Like the Justice Department’s dismissal request, Sullivan’s lack of immediate agreement with it and Flynn’s request that an appeals court force Sullivan to comply were extremely unusual. An en banc review would add to the already odd nature of Flynn’s case.

74K people are talking about this

Trump in an Oval Office meeting later Wednesday said he was very happy with the decision.

The White House
✔
@WhiteHouse
“What happened to General Flynn should never happen again in our country.”
Embedded video

4,964 people are talking about this

The president has been highly critical of the prosecution of Flynn, a retired Army lieutenant general who pleaded guilty in late 2017 to lying to the FBI about his conversations with Russia’s ambassador to the United States in the weeks before Trump’s inauguration.

“We are delighted to see the D.C. Circuit apply the Rule of Law and appreciate the professionalism of the Department of Justice in producing the exculpatory evidence and moving to dismiss a case that should never have been brought,” Flynn lawyer Sidney Powell said in an email to CNBC.

Turn to CNBC TV for the latest stock market news and analysis. From market futures to live price updates CNBC is the leader in business news worldwide.

​Trump is killing 100, 000's of Americans by putting finance and politics ahead of our Public Safety. We have a MORON for President!

Those responsible should be arrested today. Also that bent judge should see the inside of a supermax, I'm sure he would be given a great reception.

130 days until Election. God help us.

Congratulations to General Flynn. Finally a justice for you after 3 1/2 years of torture and false accusation. You are an American hero. Judge Sullivan, Comey, Obama are shame to our country. The juicy stories just starts to reveal. "Woe to the wicked! Disaster is upon them! They will be paid back for what their hands have done." Isaiah 3:11

Strzok's notes detailing the Jan 5 2016 meeting, Joe Biden ("VP") explicitly mentioned using the Logan Act to go after Flynn, and Obama explicitly directed James Comey ("D") and Sally Yates ("DAG") to investigate Flynn and use "the right people" to go after him. These are their wicked plans.

#obamagate will be Hussein's legacy, we won't use Watergate as a reference anymore, soooooooo delicious 😋

Flynn has always been innocent, they hid evidence of his innocence then they threatened to go after Flynn's son, forced him to plead guilty.
If they did it to Flynn they could do it to YOU.

"Things are about to come out "
Got my popcorn ready

The American people, who are paying attention, are getting a real education about the horror story the FBI has become under Democrat administrations. The FBI is the KGB come to Amerika. Pray you never fall into an FBI dragnet. They will destroy your life just for the fun of it.

Oh just wait till Flynn’s lawyer starts massive juicy lawsuits against your network, CNN, Obama, Joe, and many many more 🙂

I guess there a investigation going on with Biden and Obama on Fox News idk but I’m confused what’s really going here’s the link: https://youtu.be/XPMq93GkyWc

Okay, for the last four years he said some dubious things. I wish I could tell Trump (and his supporters) about WATERGATE!

THE BUNKER ALWAYS LOOK STUPID AND PATHETIC WHEN HE IS AROUND SMART MEN.

Trump and friends have been so persecuted. It's disgraceful.🤪

I am tired of hearing about how criminal the democrats were but no arrests being made. This is why we dont trust the justice system. It allows rich to get away with crimes poor people would be shoot in the streets over.